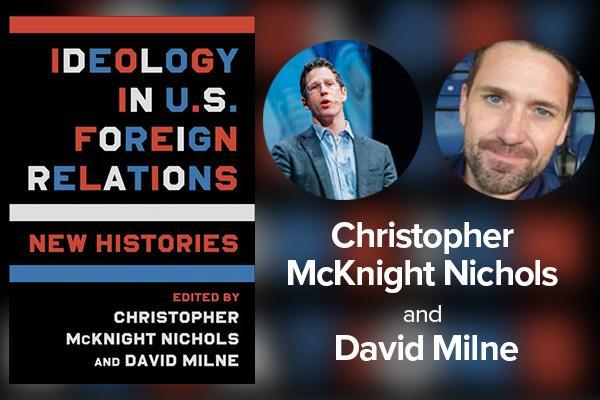 The U.S. is a nation born out of revolutionary democratic ideas, so it should follow that ideas are and have been crucial to the construction of American foreign policy. But which ones, how, and when?

Some politicians and diplomats have rejected ideology; some scholars have argued against an ideological approach to understanding U.S. foreign relations. And yet racialized notions of subjecthood and civilization underlay the political revolution of eighteenth-century white colonizers; neoconservatism, neoliberalism, and unilateralism propelled the post–Cold War United States to unleash catastrophe in the Middle East. Ideologies, according to Christopher McKnight Nichols and David Milne, order and explain the world, project the illusion of controllable outcomes, and often explain success and failure. How does the history of U.S. foreign relations appear differently when viewed through the lens of ideology?

In an ambitious multi-year, multi-national project, Christopher Nichols, the new Wayne Woodrow Hayes Chair in National Security Studies at the Mershon Center, and Professor of History, along with University of East Anglia Professor of History David Milne, have worked with over two dozen prominent historians of U.S. foreign relations to address these and related questions drawing on cutting-edge new research—the result is their just-published book Ideology in U.S. Foreign Relations: New Histories, published by Columbia University Press.

Reviewers applaud how the book moves “far beyond a traditional framing of diplomatic history,” heralding the book as “highly original and compelling” unlike anything else in the field, and as a “field-expanding book will have an enduring impact on teaching and writing in foreign relations history.”

In the book’s official launch, hosted by the Mershon Center for International Security Studies, Nichols and Milne will present key findings from the book and then have a moderated discussion with Mershon Center Director Dorry Noyes and the audience about how ideas and ideology drive and have driven American foreign policy in ways seen and unseen, past, present, and future.

This event is being recorded and may be posted to our YouTube channel. If you choose to participate in discussion, you are presumed to consent to the use of your comments and potentially your image in these recordings. If you do not wish to be recorded, please contact Andrew Mackey (mackey76@osu.edu).

If you require an accommodation such as live captioning or interpretation to participate in this event, please contact Kyle McCray, mccray.44@osu.edu. Requests made two weeks before the event will generally allow us to provide seamless access, but the university will make every effort to meet requests made after this date.

Nichols specializes in the history of the United States and its relationship to the rest of the world, particularly in the areas of isolationism, internationalism, and globalization, as well as the role of ideas and ideologies in U.S. foreign relations. He is also an expert on modern U.S. intellectual, political, and cultural history, from the Gilded Age and Progressive Era (1880-1920) through the present.

David Milne was born in Edinburgh in 1976. He graduated from the London School of Economics and Political Science with a BA in History in 1998 and an MSc in the History of International Relations in 2000. He moved to the University of Cambridge in 2001, where he was awarded his Ph.D. in 2005.

His first book, America’s Rasputin: Walt Rostow and the Vietnam War, was published by Hill and Wang in 2008. His second book, Worldmaking: The Art and Science of American Diplomacy was published in 2015 by Farrar, Straus and Giroux. The Booker Prize-longlisted novelist Christos Tsiolkas selected Worldmaking as one of his best reads of 2021 for The Sydney Morning Herald. Tsiolkas described the book as "a joyful surprise. Milne has a born writer’s intuition for narrative and character."