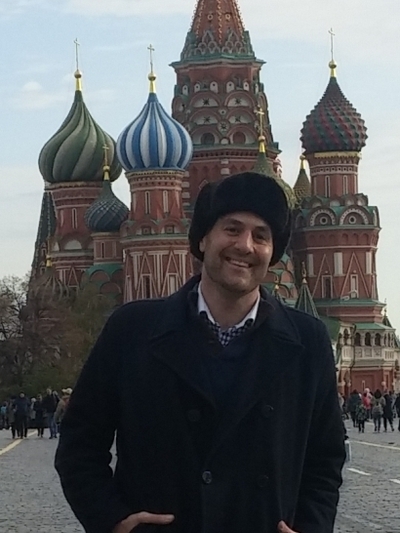 A native of Cleveland, Pietro Shakarian entered the PhD program in History at OSU in 2016. Prior to OSU, he earned his MA in Russian, East European, and Eurasian Studies at the University of Michigan in Ann Arbor, his MLIS at Kent State University, and his BA in History at John Carroll University in Cleveland.
With the aid of the Cleveland Public Library’s John G. White Special Collection, Pietro republished rare books of historical interest on the Caucasus in the Tsarist and Soviet eras. These included Friedrich Parrot’s Journey to Ararat (1846), Baron August von Haxthausen’s Transcaucasia (1854-55), and Aghavnie Yeghenian’s The Red Flag of Ararat (1932). All three books were published by the Gomidas Institute in London. In addition, Pietro has written analyses on Russia and the former Soviet region for various news publications, including The Nation, The Plain Dealer and the Russian International Affairs Council, and he has appeared as a guest on The John Batchelor Show and other programs. Since 2015, he has run the Reconsidering Russia podcast series, featuring interviews with various experts on Russia and the post-Soviet space. He also contributed several entries to The Encyclopedia of Cleveland History at Case Western Reserve University related to Russia and the Russian-speaking community of Cleveland.
His main interest is 19th and 20th century Russian and Eurasian history and the ways in which Russia’s multiethnic composition influences its politics and historical development.  His dissertation research focuses on Soviet Armenian statesman Anastas Mikoyan and the Soviet nationality policy during the Khrushchev era (1953-64).  His research interests also include the history of the Caucasus and the Russian/Soviet avant-garde.  Outside of Russia and the post-Soviet space, he studies film history and jazz history.