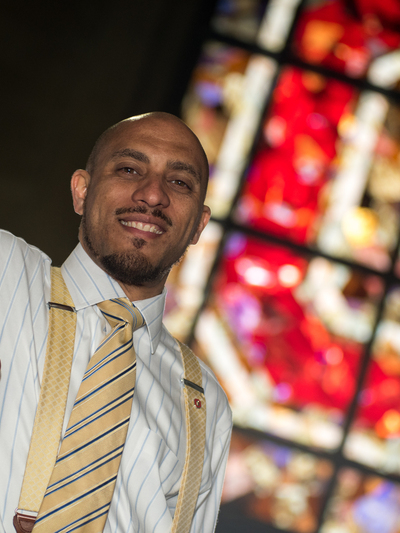 HASAN KWAME JEFFRIES is associate professor of history at The Ohio State University where he teaches courses on the Civil Rights and Black Power Movement.

Hasan’s current book project, In the Shadow of Civil Rights, examines the Black experience in New York City from 1977 to 1993. It connects key political and cultural events, such as the youth rebellion in the South Bronx, to the evolution and implementation of public policies that changed Black communities forever, such as those that undergird the war on drugs. The book aims to provide a new narrative of the Black experience in the post-civil rights era.

Hasan has worked on several public history projects. From 2010 to 2014, he was the lead historian and primary scriptwriter for the $27 million renovation of the National Civil Rights Museum at the Lorraine Hotel in Memphis, Tennessee, the site of the assassination of Dr. Martin Luther King, Jr. He hosts the podcast “Teaching Hard History,” a production of the Southern Poverty Law Center’s educational division, Teaching Tolerance. And he regularly shares his knowledge of African American history and contemporary Black politics with the public through lectures, workshops, op-eds, and radio and television interviews. He has also contributed to several documentary film projects as a featured on-camera scholar, including the Emmy nominated, four-hour, PBS documentary Black America Since MLK.

In the classroom, Hasan takes great pride in opening students’ minds to new ways of understanding the past and the present. This has led him to push the very boundaries of what we think of as a classroom, including taking small groups of undergraduates to James Madison’s Montpelier, the Virginia plantation home of the nation’s fourth president, to explore the history of race and racism in America from slavery through the present. For his pedagogical creativity and effectiveness, he has received Ohio State’s Alumni Award for Distinguished Teaching, the university’s highest award to teaching, and the Ohio State University College of Arts and Sciences Outstanding Teaching Award.

Hasan resides in Columbus and enjoys traveling to the South to visit friends and returning to Brooklyn to visit family.