Global Education Program on Diversity and Inclusion in France and Morocco

Join us in France and Morocco!

Between France and Morocco: Diversity and Inclusion in the Francophone World is a May session education abroad experience developed by the History Department in collaboration with the College of Arts and Sciences and the Office of Diversity and Inclusion. Professor Alice Conklin inaugurated this program in May 2018 with a group of 25 students, who spent three weeks visiting first France then Morocco. Professor Conklin will lead a new group of 26 students to both countries May 8-29, 2023.
This course traces the evolution of cultural, religious, racial, and national identities in France and Morocco, focusing on shared histories, cultures and languages between these two countries. Students will explore the ways in which the legacies of slavery and colonialism continue to shape both nations. France, a traditionally Catholic nation, controlled parts of the Caribbean, Asia, and Africa until the early 1960s. The kingdom of Morocco was once part of a vast Islamic empire that extended into France in the 8th century – but then France ruled Morocco from 1912 to 1956. While officially secular, Morocco remains overwhelmingly Muslim in the twenty-first century. As a result of these complex historical exchanges with each other and with other parts of the world, each country today has a significant number of religious and/or ethnic minorities who often feel the sting of discrimination. A major theme of the course is learning how France and Morocco are facing the challenges of practicing inclusivity and respecting diversity in ways that are both similar to and different from comparable struggles in the United States.
The first week of study will introduce students to the history and culture of Paris, with visits to traditional icons – Notre Dame, the Eiffel Tower, the Louvre --  and less familiar ones – the Paris mosque, the Museum of Immigration and the Holocaust Memorial. For the second week, we will head south, and make the small “postcard perfect”  city of Aix-en-Provence and the vibrant city of Marseilles our base. Marseilles is the most multicultural city in France and a gateway to the Mediterranean world, including North Africa. We spend the last eight days visiting the cities of Marrakech, Rabat, Fez and Casablanca in Morocco, discovering the nation’s deep Islamic roots and its modern experience of colonialism and postcolonial modernization.

Maya Outlaw, a junior biomedical engineering major participated on the Between France and Morocco: Diversity and Inclusion in the Francophone World education abroad program in May 2018. 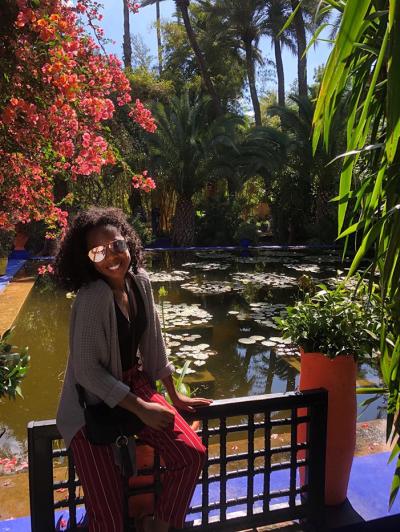 “My education abroad program studied the intertwined history of France and Morocco and how colonization effected both countries.
My transformational moment was when we visited an after school/supplemental educational facility. While at this site we heard from young women who were able to be successful in school and obtain their life goals because of this program. One girl stated that her dream was to become an agricultural engineer, and as an engineering major, it made me feel so grateful to have access to education and an infinite number of opportunities available to me.
Learning and immersing yourself in new cultures makes you appreciate what you have so much more, while also expanding your mind to what the world has to offer. The way someone perceives different experiences is so vastly unique, and I loved my study abroad experience because I was able to learn about the different ways people from Ohio State as well as in France and Morocco experience life.”


Jahzeer Hibbert, a junior marketing major and entrepreneurship and innovations minor, participated in the Between France and Morocco education abroad program in May 2018. 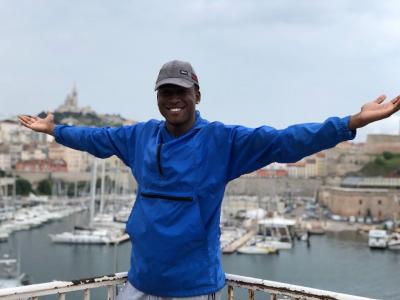 “Exploring the world has always been a dream of mine since I was old enough to understand that there were more parts to the world than where I lived in New York City. I have always desired to go to two specific places in my life time, and that was Africa and Europe because of its history and culture. My education abroad was very interesting as I was able to witness certain things first hand such as the difference in norms between Europe and America, traditions within the Islamic community in Morocco and also having to conform to them out of respect for the people that resided there.
As I stood on top of the Eiffel Tower and stared down into the streets of Paris, France, with all of its beautiful history-rich architecture, I knew in that moment anything was possible for me, and I was extremely fortunate because not everyone gets to have that experience abroad. I also discovered that being in the presence of the history you are being taught is the best way to learn.
Studying abroad is definitely an experience of a lifetime, and I urge all students who attend Ohio State to study abroad at some point in their collegiate career. You gain a deeper understanding and respect for other cultures when you are there experiencing it as opposed to reading about it. I would say my journey in France and Morocco was life changing, to say the least. And I promise, you will walk out with a different outlook on life.”

Whitney Parker, a senior double majoring in History and French participated in the study abroad Between France and Morocco in May 2018. 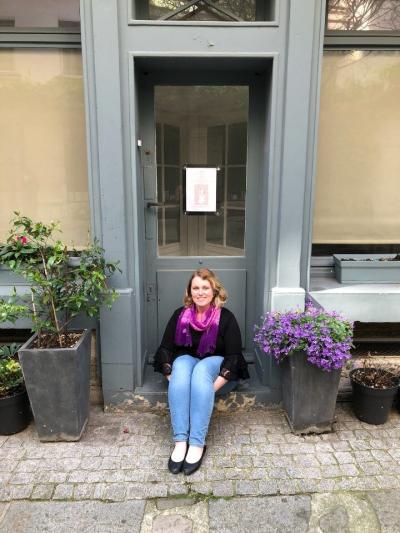 “When I first read the description for Between France and Morocco, I thought it was a perfect fit for my History and French majors. I absolutely loved the opportunity to learn about diversity, inclusion, colonization and its impact while traveling abroad.
Some defining moments for me was visiting the Grand Mosque of Paris and learning about cultural, religious, and linguistic identities over the course of the program. I had never been inside a mosque before, and this experience taught me a lot. From the history of Islam and the Arabic language in Morocco to the colonial context of immigration to France in the nineteenth and twentieth centuries, I became more aware of religions, languages and cultures with which I wasn’t familiar. I felt like the program was eye-opening for me as a student but more importantly as a person. It introduced me to new parts of France and to Morocco and how these two countries address inclusion, and I feel like BFAM is an excellent introduction to these topics.”


David Carlton, a sophomore accounting major and African American and African studies minor, studied abroad through Between France and Morocco in May 2018. 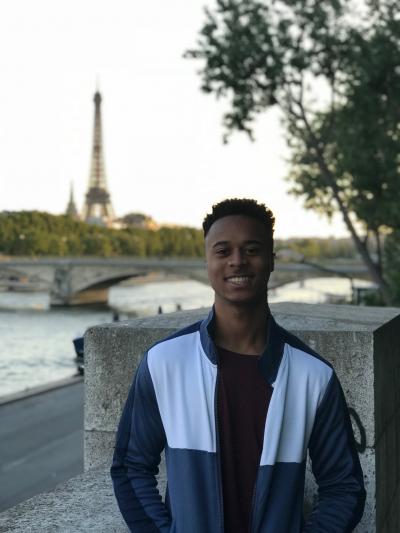 “Since my freshman year started, I knew I wanted to pursue all opportunities that would give me a great experience. Considering that this program was all contained within the month of May, I thought it was the perfect amount of time to experience new cultures while also not taking too much time away from home and other responsibilities. This program turned out to be a great comparison between two cultures that are mutually affected by an intertwined history.
My transformational moment abroad was definitely seeing the Eiffel Tower for the first time. In that moment I instantly reflected on my entire life up to this point, and further realized how lucky I was in many instances.
If possible, I would definitely encourage other students to study abroad. If you leave an opportunity like this now, it may not come up again for a long time! Not to mention that it’s always encouraged to travel in your youth.”


Halima Mohamed is majoring in Psychology and minoring in History, and was a student on Between France and Morocco in May 2018. 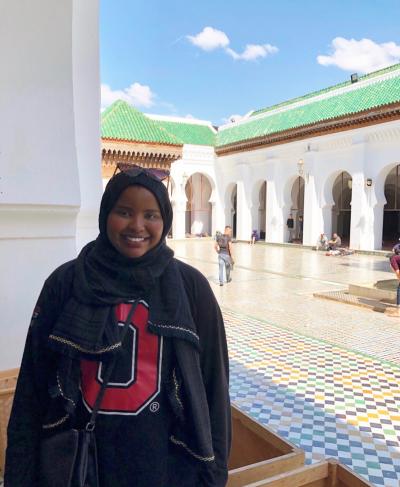 "Before going on the Between France and Morocco study abroad trip, I didn't think I would have been interested in pursuing a History Minor. I enjoyed studying history in high school but as a science major I didn't think I would have time in my busy college schedule. But after studying the history of diversity and inclusion in France and Morocco, I rediscovered my passion for studying history. Visiting places like the Eiffel Tower, The Louvre and The Quai Branly Museum in France exposed me to the rich history of Western Europe and France’s colonial past. We also visited one of the most prominent former french colonies, Morocco. In Morocco we visited the world's first university, University of Al Quaraouiyine, located in the city of Fez, as well as the only Jewish Museum in the Middle East. Being introduced to the history of both these countries encouraged me to pursue a minor in history." 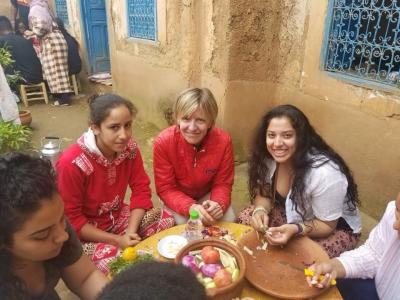 The education abroad program's Resident Director, History Professor Alice Conklin, states,
"France and Morocco are great countries to compare because of their shared history, but also because they are so different from one another. France, a traditionally Catholic country, claims to be the nation that invented modern human rights even as it practiced slavery and colonialism. Today, it is home to the largest Muslim and Jewish minorities in Europe, yet why do so many in these groups still not feel comfortable asserting their particular identities? Meanwhile France’s reputation for great style and culture make it the number one tourist destination in the world.
Morocco is the country on the African continent closest to Europe. In the modern era the French conquered Morocco along with Algeria and Tunisia; French and Arabic are its official languages, and most Moroccans are Muslim. Morocco’s spectacular mosques, food and hospitality draw visitors from around the world. But it too struggles with diversity, particularly socio-economic diversity. Why has a huge income gap developed between a small urban elite and an impoverished rural majority in this small kingdom?”
"I specialize in this history of modern France and its Empire, and one of my interests is transnational and connected history—how, for example, the history of Europe, Africa and Asia all shaped each other through both voluntary and involuntary exchanges of peoples, economic resources, and ideas. Even though the age of slavery and colonialism has officially ended, Americans, Europeans, and Africans all live in their shadow, albeit in different ways.”
About this first study abroad trip, she states, "The job of the faculty leaders is to make the past come alive through experiential learning. On this trip we combined field trips and meetings with local students; lectures and discussion time; short reading and writing assignments. In three weeks, we went from the Eiffel Tower, Cezanne’s studio in Provence, and the gritty docks of Marseilles to the palaces of Marrakech, the souks of Fez and an inspiring cultural center in a blighted part of Casablanca. We discovered the complex history that connected all these places, and came home much better informed about an earlier era of globalization and its rich if painful legacies.”

This program is coordinated through the Office of International Affairs. For more information and to apply for this program, please visit the OIA web site here.