Experience one of the Global "Hotspots" of the Early Modern World: Buenos Aires

Buenos Aires is considered one of the global hotspots of the Early Modern World in that it was an important site of trade, cultural influence and political expansion. In the 18th century, it was considered a key port for Spain's American empire. As a result, immigrants from Africa, Europe and Asian moved to Buenos Aires, influencing the culture and commerce of the area. Today it is still known for its cultural diversity. With a population of 13 million it is the second largest metro area in South America.

Through the course, students will learn about the emergence and history of the centers that connected Old and New Worlds and that served as places of innovation in commerce, political structures, and ideas. Student in the class will obviously benefit from this exciting international travel experience and exposure, as well as acquire new depth of knowledge about the history of global interconnectedness.

Participants on this program will gain knowledge about the origins of global trade, the competition amount rising nation-states, the unequal relations between centers and peripheries, and the the pathway to economic development that colonial regions followed. This will build a great foundation to better understand the present day world and development economics. Students will come to understand the ways in which diverse migrations shaped cities, how European influences met with indigenous and Asian influences to create new hybrid cultures and modes of urban living.

During the global education abroad trip, students blog about their experiences. Below are some of the highlights from past blog posts.

"I had been looking forward to this event way back before we had even left for Argentina, and the trip did not disappoint! A brief history of gauchos and estancias in Buenos Aires {they} began in the 17th century after cows had been found around the Pampas. These gauchos (not named until later) established estancias (large cattle ranches) there and became well known for being great horsemen. In the next century, the gauchos used the leftover cattle meat to eat and prepared it over fire in a way that is now known as asado......  I enjoyed myself today very much, I will always remember the time I rode horses in Argentina. Not many people can say they have done that! This trip is amazing and I can’t wait to see what will happen next!" — Carly Green

"I liked having the opportunity to read older Spanish primary source documents because it allowed me to see and compare how Spanish was once written and how it is written now. I feel that going to the national archives was one of the best ways to see first hand how a language can develop... I realize more and more each day how big this city is and how much it has happening within it. Although it may be exhausting, it’s amazing how much we can accomplish and see everyday."  — Christopher Matteo

"On Monday May 25th we had our private Malba [Museum] tour. In my opinion, this was one of the best art museums we went to. There were 3 floors and each floor was unique in their own way. The first and the third floors were interactive (some students were even afraid sometime). One of the pieces of art I liked was called Suspension of Disbelief. This was one of the live pieces of art. There were a web of threads connected to different parts a man’s body and whenever he moved another object nearby, connected to the thread would move." — Charles Swan

"This was the smallest house in Buenos Aires when it was still being used as a house. While this “house” contained only a single-claustrophobic room, the house was filled with history. It was originally a part of a much larger mansion, but when slavery was abolished by the constitution in the mid-19th century, the family divided up different parts of their mansion and gave them to their former slaves so they could continue working as servants.  When Yellow Fever and Cholera infected San Telmo, the wealthy inhabitants fled to the countryside, leaving their abandoned homes in the hands of their former slaves. Because the Africans stayed behind, many were killed by the disease. This is one reason why there is not a large African American presence in Argentina today." — Victoria Wabler 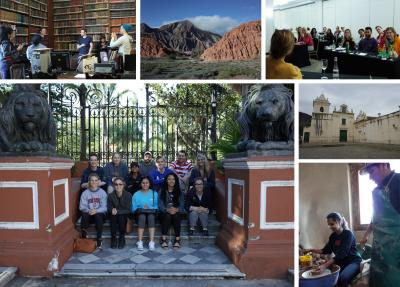 "This ended up being one of the first private archeological works and it is very fascinating how this property was built on the southern creek that led to the river. The tunnel was separated by house so that each neighbor could privately use their tunnel. The entire restoration process took about 20 years and it is believed that it took about 50 years to tunnel the whole stream." — Andre'as WIlliams

"...we went to Malba, the modern art museum. I thought that this was a really cool experience because it was so different from any other museum we have been to. There were a lot of pieces that used light and optical illusions as part of the art and others that used human subjects."  — Kathryn Marhenke

"In the evening we attended a tango show at El Querandi. ...The show took the audience through the evolution of the tango beginning with the influences of immigration and ending with modern Buenos Aires. The dance partners, outfitted in beautiful costumes reflecting the time period, held each other close while exhibiting intricate footwork and daring lifts. Musicians played, and the music live adding an authentic flare to the show. Tango singers crooned the beautiful lyrics of the tango." — Mary Nemer

"My favorite Pueyrredon work was a larger than life sized portrait of Manuelita Rosas, a revered Argentinian political figure and daughter of Juan Manuel de Rosas. I learned that Pueyrredon was a key figure in the design and fabrication of the May Pyramid in Plaza de Mayo, a monument that has been at the center of our adventures in Buenos Aires. In the contemporary collection, I enjoyed that the pieces focused on great detail but when you took a step back the artwork revealed a completely different pictures." — Gabrielle Davis 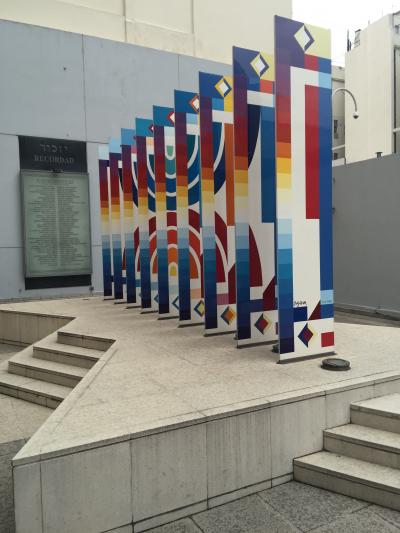 "Argentina has a large Jewish community of about 300,000 people, the vast majority of whom reside in the city and suburbs of Buenos Aires. This constitutes the sixth-largest Jewish community in the world, albeit it was at one point the third largest. We started the day with a visit to AMIA, the main association for Jewish people living in Argentina. AMIA had been bombed in 1994 in what is the single deadliest bombing in Argentine history, killing some 85 people and injuring hundreds more... I learned so much about the Argentine Jewish community that I did not know before." — Mircea Lazar

"But despite the loss caused by terrorism the the strong Jewish community rebuilt AMIA in 1999 at the same spot where the bombing took place. A beautiful art piece was then made to honor the victims of the horrified bombing. The art piece demonstrates a symbol against terrorism and the expression of Jew’s struggle, peace and truth. You can view this art piece in 7 different ways and it showed you 7 different images. Some of these views symbolized the Argentina & Jewish flag, a rain bow that shows that after rain sun shines, candles that represented looking into the past to move on to the future and many more." — Yonatan Tsige

Read an article about the program from our departmental newsletter. 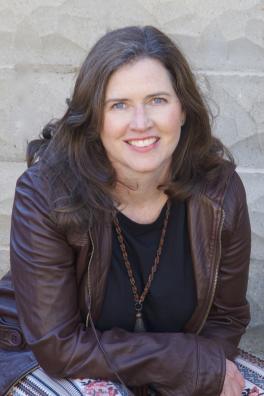 The education abroad program's Resident Director, History Professor Margaret Newell, states, "Argentina is a great case-study for comparison with the U.S. The English were much more interested in their Caribbean colonies and India, and the Spanish privileged Mexico and northern South America, so Boston, New York and Buenos Aires shared the experience of being economic backwaters until the late eighteenth century. The American Revolution strongly influenced Argentina's independence movement, and Argentina encouraged immigration in the 19th century in an effort to be more like the U.S. Both countries pursued violent wars against their indigenous populations, and both experienced civil war and regional tensions. Argentina's economy was in the top ten globally in 1900—but political stability, shared prosperity, and sustained development remained elusive--'why?' is the question."

"I specialize in colonial and Revolutionary U.S. History, and one of my interests is in comparative history--the similarities and differences between colonial British America and Spanish America. One key question for comparative historians is why the post-independence trajectory of both regions has been so different, considering the wealth, infrastructure and human potential many regions of colonial Latin America had on the eve of independence."

About a recent study abroad trip, she states, "Having Ohio State faculty leaders means that these programs serve a real educational purpose—they are not just vacations. We encourage students to dig deep and understand the complex history behind the present-day realities in the countries we visit. We had class meetings almost every day in which we explored the colonial and revolutionary history of Argentina. We went to the National Archives to do research, and each student completed a research project. We attended a class at the University of Buenos Aires and had another session with a political scientist who talked to the students about Peronism, the era of the Dirty War and dictatorship, and about the current administration of Cristina Kirchner and the upcoming elections."

"Buenos Aires is a great world city with fantastic parks, bookstores, arts, public transportation, entertainment and other amenities—it was a fun and easy place to visit. But observing the differences between modern Argentina and the United States, and considering the historical roots of these differences, was really a transformative experience."

This history global education program is coordinated through the Global Education Program in the Office of International Affairs. For more information and to apply for this program, please visit their website here.