The Department of History offers a variety of education abroad experiences. Studying abroad allows students to learn about history while absorbing the culture of an area. The links below offer more information about our current programs. 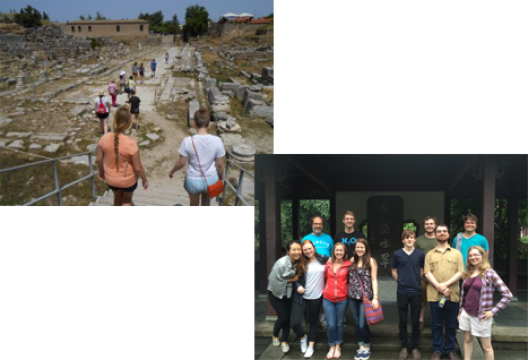 We also offer a Transnational History of World War II. This program differs in that students take coursework on campus the semester before they travel abroad. Led by Professor David Steigerwald, this program studies the war at close range through visits to relevant European museums, battlefields, memorials, Auschwitz, and other sites. Stays include London, Normandy, Paris, Poland, and Berlin.

These scholarships support undergraduate Arts and Sciences majors who are enrolled on the Columbus campus and are participating in an Ohio State approved education abroad program. Students may apply for all of the following scholarships online. Visit the scholarships page for more information and application deadlines. Contact: Ann Rottersman, director of student programs, with questions.
• Keith and Linda Monda International Experience Scholarships: Support undergraduate Arts and Sciences majors who would not normally be able to afford an international experience. Financial need is determined by the Financial Aid Office based on information provided on the Free Application for Federal Student Aid (FAFSA). Students must have a current FAFSA on file.
• Roth Family Endowment: Open to Columbus campus undergraduate students with a declared major in the arts and sciences who plan to study abroad and are active in the Recruitment and Diversity Services office Program for Advancing Scholarship and Service (PASS).
​• Scholarships for Humanities Majors: Open to undergraduate students with a declared major in the humanities. Some funds have additional specifications.