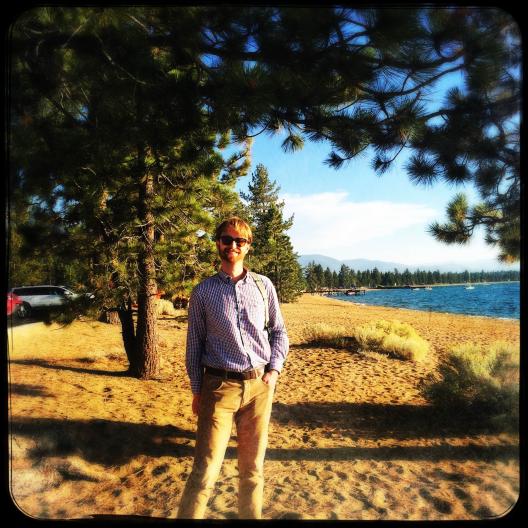 How did you become interested in history as an academic discipline? What made you want to major in History?
Growing up I was interested in history because my father is a historian, and facts about the past always seemed to stick in my head, but I didn't become interested in history as an academic subject until I came to Ohio State. My freshman year I was required to take a two part history survey, and I chose the Latin American History survey because I didn't know much about Latin American history. I love those two classes. They opened my eyes to the value of history for understanding someone's point of view. It wasn't enough to just know the facts of what happened, you also had to be able to put yourself in a historical person's shoes and understand why they did what they did. The most memorable part was when as a class we held a "trial" of Hernan Cortes, who disobeyed the Governor of Cuba and led a small group of men to conquer the Aztec empire, in the process murdering and enslaving thousands. I got to play Cortes, and to do so I had to see things from his perspective. His actions were reprehensible, but he would not have seen them that way, and in fact his King rewarded him richly for his actions. Understanding that allowed me to understand the world in which he lived, and partly why Latin America is the way it is today. After that I was all in for majoring in history.
Tell us about your experience taking courses in the Ohio State Department of History. Do you have any particularly vivid memories from your time as an undergraduate?
The history professors I had at Ohio State were without exception very passionate and engaged in what they were teaching. I loved those classes, and most of them still stick out in my mind. My senior year I was lucky enough to be invited by Prof. David Stebenne to take a graduate level seminar on the History of Modern American Political Economy. This was in 2006, and looking back I feel like everything we discussed in that class prefigured the recent recession and many of the political debates we're having now about the decline of manufacturing jobs and organized labor, the persistence of racial inequality, and the rise of globalization.
How did your experience as a history major help prepare you for the future, both professionally and personally?
I became a much better writer and careful and critical consumer of information through the process of reading, researching and writing for my history classes. Those skills have been essential in my career. I work for the Interior Department managing federal public lands out West, and currently I'm on a fellowship working for Sen. Harry Reid of Nevada. A significant part of my job is to quickly write reports, memos, speeches, emails, etc. that distill complex information and make it understandable for a variety of different audiences. Also, my history professors at Ohio State pushed me to develop my own thoughts and ideas, and that has been invaluable.  A lot of what I'm paid to do is to make recommendations on a best course of action given a set of complex circumstances, and I think if I hadn't spent so much time at Ohio State learning to think through complex historical issues carefully and thoughtfully, I'd have a much harder time doing that.
What advice would you give to current or prospective history majors who are interested in careers in government?
Challenge yourself. It's better to make mistakes now and learn from them then it is to make them later when the stakes are higher. For instance, I've been surprised at how many people I've worked with in government struggle to write well when it is such a valuable skill and one you can definitely improve by challenging yourself in college. Also, I recommend learning good research skills. Not just how to google stuff, but how to find good reliable information quickly. Government work involves a lot of research to understand problems and how people have tried to solve them before. Finally, government is about relationships. If you want to get involved in government, I recommend spending time building personal relationships with people who work in or want to work in government. I chose to go to graduate school at Georgetown because it was in Washington, DC and my program in American Government had a component that involved getting an internship working in government. That gave me the opportunity to begin building my network of folks who work in the federal government, and most of the opportunities I've had since then have come from the relationships I've built. I'm not the most out-going person in the world, I think most people would describe me as quiet, so don't think you have to be outgoing to succeed in government or at networking. But relationships are valuable, so dedicate time to building meaningful ones and you'll be surprised at how much those folks will help you succeed.