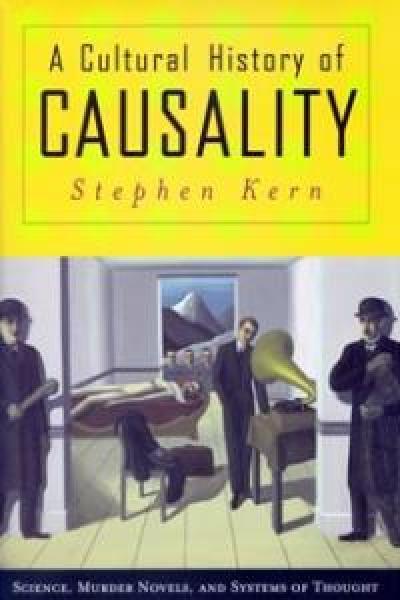 From the publisher site:

This pioneering work is the first to trace how our understanding of the causes of human behavior has changed radically over the course of European and American cultural history since 1830. Focusing on the act of murder, as documented vividly by more than a hundred novels including Crime and Punishment, An American Tragedy, The Trial, and Lolita, Stephen Kern devotes each chapter of A Cultural History of Causality to examining a specific causal factor or motive for murder--ancestry, childhood, language, sexuality, emotion, mind, society, and ideology. In addition to drawing on particular novels, each chapter considers the sciences (genetics, endocrinology, physiology, neuroscience) and systems of thought (psychoanalysis, linguistics, sociology, forensic psychiatry, and existential philosophy) most germane to each causal factor or motive.

Kern identifies five shifts in thinking about causality, shifts toward increasing specificity, multiplicity, complexity, probability, and uncertainty. He argues that the more researchers learned about the causes of human behavior, the more they realized how much more there was to know and how little they knew about what they thought they knew. The book closes by considering the revolutionary impact of quantum theory, which, though it influenced novelists only marginally, shattered the model of causal understanding that had dominated Western thought since the seventeenth century.

Others have addressed changing ideas about causality in specific areas, but no one has tackled a broad cultural history of this concept as does Stephen Kern in this engagingly written and lucidly argued book.