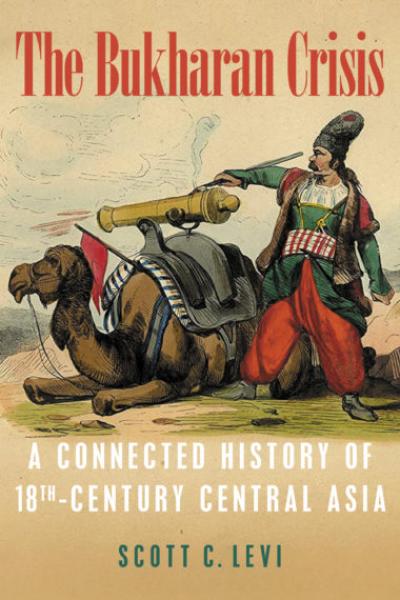 Series Title: Central Eurasia In Context
In the first half of the eighteenth century, Central Asia’s Bukharan Khanate descended into a crisis from which it would not recover. Bukharans suffered failed harvests and famine, a severe fiscal downturn, invasions from the north and the south, rebellion, and then revolution. To date, efforts to identify the cause of this crisis have focused on the assumption that the region became isolated from early modern globalizing trends. The Bukharan Crisis exposes that explanation as a flawed relic of early Orientalist scholarship on the region.
In its place, Scott Levi identifies multiple causal factors that underpinned the Bukharan crisis. Some of these were interrelated and some independent, some unfolded over long periods while others shocked the region more abruptly, but they all converged in the early eighteenth century to the detriment of the Bukharan Khanate and those dependent upon it. Levi applies an integrative framework of analysis that repositions Central Asia in recent scholarship on multiple themes in early modern Eurasian and world history.
(ISBN : 9780822945970)

Scott Levi’s The Bukharan Crisis brings the history of 18th-century Bukharan emirate into dialogue with major recent debates in the historiography of early modern Eurasia, such as Sanjay Subrahmanyam’s ‘Connected Histories’, Victor Lieberman’s Strange Parallels, and Geoffrey Parker’s Climate and Crisis. It contains a great deal of learning worn very lightly, and manages the rare feat of being accessible to undergraduates while making a significant and lasting contribution to scholarship.
--Alexander Morrison, New College, Oxford
Levi reorients our perspective on early modern world history, putting Central Asia back in the center, where it belongs. In this accessible, lively, fact-filled account, he shows how Central Asians, despite political upheaval, actively engaged in the world economy, joining a vast ‘multivectored network’ linking Russia, China, India, and the Middle East. Challenging conventional wisdom, while adding new life to well-worn concepts like the Silk Road, or the decline of nomadism, he inspires scholars and general readers to tackle big historical questions in a serious way.
--Peter C. Perdue, Yale University