August 1914: France, The Great War, and a Month That Changed the World Forever

August 1914: France, The Great War, and a Month That Changed the World Forever 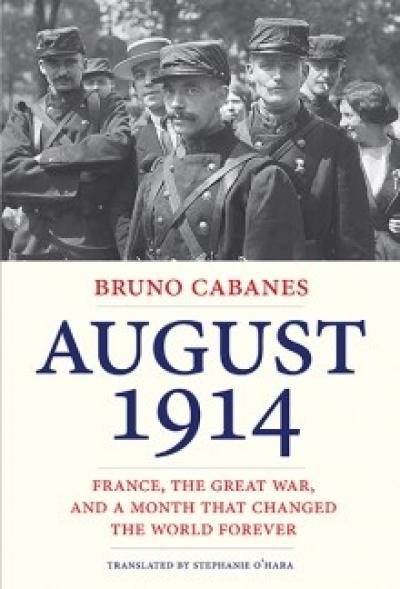 Published in English translation by Yale University Press in 2016.

A haunting portrait of France at war
On August 1, 1914, war erupted into the lives of millions of families across France. Most people thought the conflict would last just a few weeks.
Yet before the month was out, twenty-seven thousand French soldiers died on the single day of August 22 alone—the worst catastrophe in French military history. Refugees streamed into France as the German army advanced, spreading rumors that amplified still more the ordeal of war. Citizens of enemy countries who were living in France were viciously scapegoated. Drawing from diaries, personal correspondence, police reports, and government archives, Bruno Cabanes renders an intimate, narrative-driven study of the first weeks of World War I in France. Told from the perspective of ordinary women and men caught in the flood of mobilization, this revealing book deepens our understanding of the traumatic impact of war on soldiers and civilians alike.
August 1914 was a finalist for a prestigious French book award, the Prix Fémina for nonfiction, in 2014.
---------------------------------

“This is an exceptional book, a brilliant, moving, and insightful analysis of national mobilization.”—Martha Hanna, author of Your Death Would Be Mine: Paul and Marie Pireaud in the Great War
(Martha Hanna)

“Bruno Cabanes is without question one of the leading historians of War and Society writing anywhere. August 1914 is a remarkable account of the first month of the Great War in France. Brilliantly written, it brings together diplomatic, military, political, and social history in an engrossing narrative of daily life in a new and unprecedentedly murderous conflict.” —John Merriman, Charles Seymour Professor of History, Yale University
(John Merriman)

“Renowned military historian Bruno Cabanes has given us an extraordinarily moving account of the first traumatic weeks of the Great War. Using largely neglected primary sources and eschewing the well-trodden diplomatic approach, Cabanes focuses on the passions and traumas of an entire people. This book deserves a wide readership from historians, critics and anyone interested in the catastrophe of war.”—Mary Louise Roberts, Distinguished Lucie Aubrac and Plaenert-Bascom Professor of History, University of Wisconsin, Madison
(Mary Louise Roberts)

“The First World War has now faded below the horizon of living memory, but in this marvelous book, beautifully written and translated, Bruno Cabanes gives us as vivid a sense as possible of what it was like to be in France during the war’s first month. The sounds, sights and emotions of August, 1914 are all evoked with exceptional skill.”—David A. Bell, author of The First Total War: Napoleon’s Europe and the Birth of Warfare as We Know It
(David A. Bell)